Yesterday marked the 65th anniversary of the release of Paramount's Houdini to movie theaters in 1953. The movie was a popular success and played in theaters and drive-in's for years. (I've found showings as late as 1957.) But Houdini may have enjoyed even greater success, and had its greatest impact, on television.

Houdini first aired on television on January 30, 1965, as NBC's "Saturday Night Movie." Maybe owing to the fact that the movie was in color and featured stars who were even more famous in 1965 than they were when the movie was made, the broadcast received a lot of attention. NBC would repeat the movie several times throughout the year.

Houdini became a perennial on TV, airing multiple times every year, carrying the touch and igniting interest in many new fans, included me. All this time it was also priming the pump for the great Houdini and magic renaissance of the 1970s, which you could say actually began here in 1965. And if you think I'm reading too much into the impact Houdini's television debut, check out this June 27, 1965 news item in the San Antonio Express: 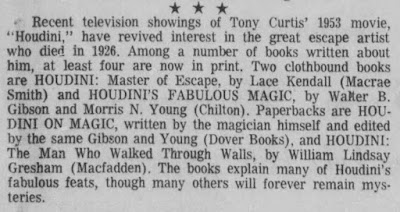 One of the highlights of Houdini's many television airings were the ads for it in newspapers and TV Guide. Below is an unusual one from 1967 that paired Houdini with the 1965 biopic Harlow starring Carroll Baker.

There's no question that part of Houdini's enduing fame can be credited to the Tony Curtis movie, first with it's theatrical release and later its extended life on TV. That impact may now have wained, but Houdini is still shown every year (now on MOVIES!) and I still think it has the power to work its magic on the right viewer.

You can click here to review all 98 posts I've made about Houdini (1953) here on WILD ABOUT HARRY.