Here's a little something I recently got on eBay. It's not generally known that the Houdini-Hardeen show continued after Hardeen's death. Dash named his assistant, Douglas Geoffrey, as his successor during his last performance on May 29, 1945. Geoffrey took up the wand and performed as "Hardeen, Jr."

This is an advert for what I believe was Hardeen, Jr.'s first tour in 1945. I like that it has a photo of Houdini and the name, "Houdini Lives Again." Not a big ticket item to be sure (I paid a whopping $1.99), but I love this stuff. I feel like these are fragments of the Houdini story that are too far down the road for most historians to bother with. But I like going to the end and seeing what's there. And what's there is this: 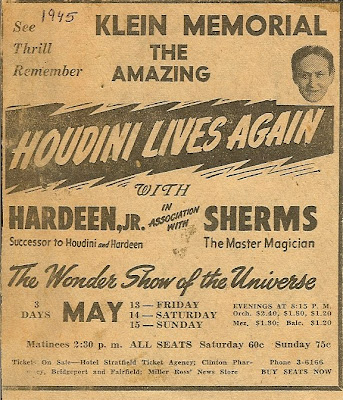 For more on the life and career of Douglas Geoffrey see: The untold story of Hardeen Jr.
Written by John Cox at 7:14 AM