This weekend we are Wild About Bess 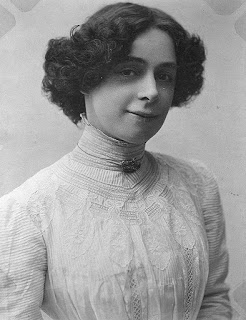 This weekend we celebrate the birthday of Bess Houdini, who was born Wilhelmina Beatrice Rahner on January 22, 1876, in Brooklyn, New York. At least that's the date that is most frequently cited. As with her famous husband, Bess's exact birth date is not without controversy. Some sources, including the California Death Index, say she was born on Jan. 23. Some even put the year as 1875. So to play it safe, let's make this a TWO day celebration. As more than one of my fellow Houdini buff said to me, "If Houdini could have two birthdays, why not Bess?"

Bess and Harry worked as The Houdinis for several years before Houdini hit it big as The Handcuff King. But he and Bessie continued to occasionally perform the Metamorphosis. Bess also saw after their menagerie of pets, collected dolls, and made the costumes for Houdini's full evening show. She also always said it was her duty to make sure her absent-minded husband was dressed well and had clean ears (yeah, a little mothering -- but this is Houdini we're talking about here).

By all accounts, Bessie was strong-willed, feisty, and very spirited. While her husband was a teetotaler, Bessie enjoyed her champagne. After Houdini's death, Bess continued promoting his legacy along with her manager and companion (and some say secret husband), Edward Saint. She occasionally performed herself, and also ran a tea room at 64 West 49th Street in New York called Mrs. Harry Houdini's Rendezvous (now the site of Rockefeller Center). In the 1930s she and Ed Saint moved to Hollywood, CA.

In 1936 Bess and Ed Saint held the legendary Final Houdini Seance atop the roof of the Knickerbocker Hotel just off Hollywood Blvd. The event garnered headlines around the world, which may have been the actual intent. When asked candidly what they would have done had Houdini come back that night, they are both said to have laughed and Saint is reported to have said, "Bess would have dirtied her pants if that had happened!"

In 1939 Bess helped form the MagiGals, a group of female magicians and enthusiasts, which included Gerri Larsen, the mother of Magic Castle co-founders Bill and Milt Larsen. She also appeared as herself in the film Religious Racketeers


Here are a few musts for you Bessie fans. Track down the October 1995 issue of MAGIC magazine which contains a terrific cover story about Bess by David Charvet (which I've liberally used as a source in this article) with amazing photos from the Mario Carrandi Collection. Also, the new companion book to the traveling exhibition, Houdini Art and Magic

, has a very fine chapter devoted to the woman behind the man. And even though it's filled with mythology -- or "full of lies" as Hardeen said -- Houdini His Life Story: From the Recollections and Documents of Beatrice Houdini

is a still a wonderful read. You can also become a fan of Bess on Facebook.

By the way, I've heard talk of a possible Bess biography in the works. Let's hope this is true. Bess's story deserves to be told, just as her birthday deserves to be celebrated. So forget Harry. This weekend we are "Wild About Bess." And so are you.