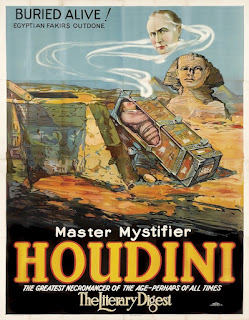 Houdini was fascinated by the idea of doing a "Buried Alive" stunt, but he could never quite figure out to present it onstage or off. Because of this, accounts of his Buried Alive experimentations are a little unclear. Well, I'm about to make them more so.

The accepted story has it that Houdini first tried a Buried Alive stunt in California. He was buried shackled in a pit of earth six feet deep, and it almost killed him. Houdini shelved the idea until the mid 1920s when he performed "Buried Alive" as an endurance test -- remaining in a sealed casket submerged in the pool of the Hotel Shelton for 90 minutes, using controlled breathing to stay alive. Off that success, he planned to debut an elaborate stage version that would see him strapped in a straitjacket, sealed in a casket, and buried in a large tank filled with sand. He had a well-known poster created advertising the new escape ("Egyptian Fakirs Outdone"), but died before he could make it a part of his full evening show.

Sounds good, doesn't it? Then how do we explain THIS...

.) This is clearly the big stage version of Buried Alive that Houdini was planning for his last season. But this lithograph is dated 1914!

That puts this three years before the infamous California test and twelve years before his "new" effect for his full evening show.

According to the caption in MAGIC, this particular buried alive stunt "was never produced, and proved too difficult." The 1914 date is printed on the poster itself, so it's not a misprint. Besides, that is clearly a younger Houdini in the poster image. For all his vanity in other ways, Houdini did not portray himself as younger than he was on his publicity (just look at the later Buried Alive poster).

There is no mention of this in Ken Silverman's Houdini!!! The Career of Ehrich Weiss

. Kalush and Slomon in The Secret Life of Houdini

also make no mention of this effect in 1914. However, they do state that Houdini was working on a "big new illusion, Buried Alive" in 1918, but offer no details (possibly he was still working on the 1914 stage version?).

So I guess the new story needs to go something like this: In 1914 Houdini first developed an elaborate stage version of Buried Alive. But he never performed it as it proved to be too difficult (to stage?). Three years later, he tried a no-frills version as an outdoor stunt in California, and it darn near killed him. He dropped the concept until the Shelton test in 1926. He then pulled out his old stage version, once again had posters prepared, but died before he ever performed it. [Actually, he did. See UPDATE below.]

By the way, the coffin that was used to ship Houdini's body back to New York after his death was either the coffin he had prepared for this effect, or it was the new casket he had made for his little-known second underwater pool test in Worcester MA. Or maybe they are one in the same? That is also still somewhat unclear.

One last thought on Buried Alive. While the Bullet Catch is generally considered the most dangerous effect in magic, surely Buried Alive can't be far behind. There have been fatalities even in modern times. As Houdini discovered, "the weight of the earth is killing."

UPDATE: Looks like the mystery of the death casket has been cleared up. Read: Uncovering Houdini's THIRD air-tight container test and death casket.

UPDATE 2: So much for the idea that Houdini never performed this version of Buried Alive. Read: Ad shows Houdini performed Buried Alive in 1926 and Houdini on his 1926 Buried Alive: "I like it very much."
Written by John Cox at 10:12 AM