One of a kind Houdini rarities sell in Martinka auction

Several very nice magic items sold in a Martinka and Co. auction over the weekend for some impressive prices. Among the highlights were Houdini's 1908 Dragon Award Cup and his Bean Lock Picking Device. I'm especially thrilled to see the Dragon Cup. I've always wondered what happened to Houdini trophy collection which he proudly displayed in the foyer of 278. For example, where is his Aviation award today? This was certainly part of that collection, so it's great to get a look at it, if only briefly.

Here are the item descriptions and prices realized. 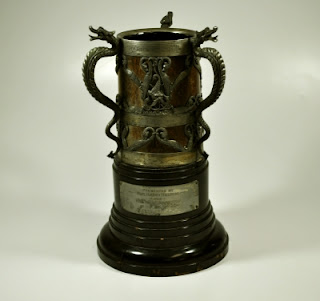 A grand and important piece once owned by the Great Houdini.

This unique award cup was given to Houdini and engraved: "Presented to Harry Houdini - March 14, 1908 by the management of the Temple Theater in Detroit Michigan for record breaking attendance." The cup was later presented by Bess Houdini to James Stoppard of the P.E.A.M. The award stands 15" tall with three 9" dragons surrounding the main body.

A truly unique item that would be a highlight, if not the centerpiece in any Houdini collection, as it represents his successful accomplishment of breaking box office records.

Condition is very good, the wood and metal is slightly dulled and could be polished to restore its original luster. Complete with letter of authenticity. 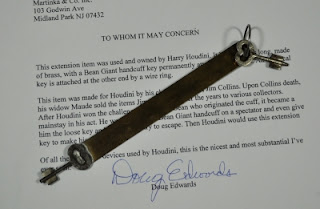 A desirable and historic lock picking device as used by Houdini.

This is custom 5.5" extension key made of brass. It features a Bean Giant handcuff key permanently attached to one end and an identical key held by a key ring on the other. The key was made by Houdini's closest assistant Jim Collins and was used as a mainstay in his act after winning the challenge given by Captain Bean, the originator of the cuff.

This was one of only a few items held back from the Swann Auction of the Doug Edward's Houdini Collection. A unique piece that includes a letter of authenticity from Doug explaining the background of this historic item.


Congrats to the buyers of these one of a kind Houdini rarities.
UPDATE: Houdini's aviation award is in the Harry Ransom Center. Here it is today.
Written by John Cox at 6:55 AM