Houdini and his Humber

By his own admission, Houdini was not a fan of driving. He complained he was far too easily distracted to concentrate on the road. Regardless, Houdini bought himself a Humber motor-car in England in 1904. A gift to himself for beating the Mirror cuff maybe?

Check out this fantastic clipping from the London Daily Mirror, courtesy of Marco Pusterla of The Ephemeral Collector, and see how everything "The Handcuff King" did back then was news.

What I really like about this clipping is that it gives us the make of the car, which, as far as I know, has never been identified before. Humber was an English car maker, at one time the second largest manufacturer of cars in the UK. You can see a terrific full shot of the Humber containing Houdini, Bess, Martin Beck, and the Houdinis dog Charlie on page 9 of Houdini Art and Magic

. For more information on Humber cars, check out this excellent history of the company.

Speaking of Houdini and automobiles, this curious photo showed up on eBay sometime back in the '90s. Did Houdini really have a car accident in Oakland in 1912? I've not been able to even place him in Oakland in 1912. In fact, his 1915 engagement (in which he played opposite Hardeen) was billed as his "First Time in Oakland." But if this is a real photo, maybe this is what put him off driving. 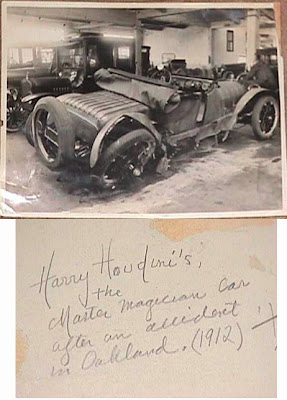 UPDATE: Under the hood of Houdini's Humber.
Written by John Cox at 10:52 AM