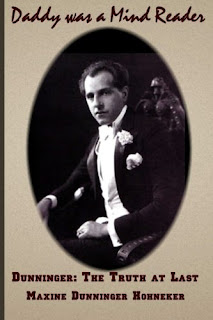 Daddy Was A Mind Reader: DUNNINGER The Truth at Last

is a remembrance of the great mentalist written by his daughter, Maxine Dunninger Hohneker.

Dunninger and Houdini were close friends and fellow ghostbusters. He was also the technical advisor on the 1953 biopic, HOUDINI

. The book contains a chapter devoted to "Mr. Houdini" and many references throughout.

UPDATE: Having promoted (and now purchased) this book, I think it's my obligation to provide a little feedback for potential buyers. This is a self-published effort and it does indeed contain some wonderful remembrances of Dunninger by his daughter. There are some interesting Houdini tidbits as well.

But understand that's what you're getting -- remembrance and musings. This is not a professionally produced book. This is pretty much free-flowing thought, sometimes stream of consciousness, sometimes a touch bizarre (a quote from Glen Beck?). It also has several repeated passages (in the case of "Houdini The Movie" the entire chapter is printed twice), and an abundance of factual errors when it comes to Houdini. The errors don't bother me because it's the first-hand memories of Houdini and her father that I'm really interested in. But I'm just warning it might disappoint if you're expecting something a little more authoritative and professional.
Written by John Cox at 5:30 PM

Email ThisBlogThis!Share to TwitterShare to FacebookShare to Pinterest
Tags: Books, Dunninger, Other magicians