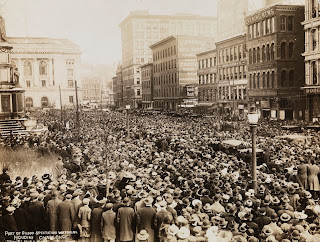 Our all-time most viewed story is The illicit loves of Harry Houdini. Yes, sex sells. That's followed by A Houdini photo you've never seen and my discovery of RKO 589: Hollywood's first Houdini film. Over 50% of our viewers are in the United States, followed by Australia, Canada, UK, South Korea, Germany, Japan, Russia, Chile, and Denmark. Most of our users connect via Windows (78%) followed by Mac (16%), iPhone (1%), iPad (1%), and Other Unix (1%).

Traffic flows primarily from our Facebook page, Google, my old website, the forums at Genii, The Magic Cafe, and Handcuffs.org, and even old mySpace. Curiously, even though we have a presence on Twitter, no traffic comes from there. It doesn't even register on my stats. Does the emperor have no clothes?

Thanks to everyone for the hits. I've now added a Pageview Counter to the bottom of our right side links. Let's hit 20,000 by Harry's birthday!

Photo: Houdini Art and Magic
Written by John Cox at 7:31 AM