Cambridge Press releases A Magician Among the Spirits 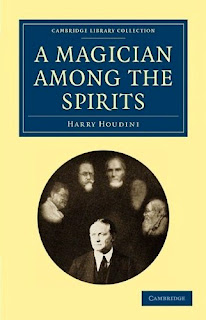 Cambridge University Press has released a new paperback edition of Houdini's 1924 book, A Magician Among The Spirits

, as part of their Cambridge Library Collection. Cover art features a classic spirit photograph of Houdini.

Despite the release date showing as May 19, 2011, Amazon.com has the book in stock now.

A Magician Among the Spirits was Houdini's last published book.
Written by John Cox at 10:27 AM

Email ThisBlogThis!Share to TwitterShare to FacebookShare to Pinterest
Tags: A Magician Among The Spirits, Books, Books by Houdini, Spiritualism, Writings