The women who have played Bess

We end our special weekend long Bess Houdini birthday celebration with a look at how the great lady has been immortalized on stage and in film. Here are seven actresses who brought our Bessie back to life.

Janet Leigh (Houdini, 1953): What can one say about Janet Leigh, other than she was every bit as glamours as her co-star and real-life husband, Tony Curtis, and that's saying something! But did she make a good Bess? Well, for starters, Janet Leigh is a blond-haired, blue-eyed, curvaceous bombshell. The real Bess Houdini had dark hair, dark eyes, and was unusually small and slight of build. But, hey, the 1953 HOUDINI

was hardly a biography that sought realism. Instead, this much-loved movie strove to capture the drama and glamour of the Houdini-Bessie story (and make no mistake, the movie is as much about her and him), and in that sense Janet Leigh is a perfect Bess.

When asked about the real Bess in a 1995 interview in MAGIC magazine, Janet Leigh said, "I think she was strong. Completely believing in him and helping in all ways. She obviously truly loved him. It was a great love story, as far as I could determine. At least that's what we tried to make it." 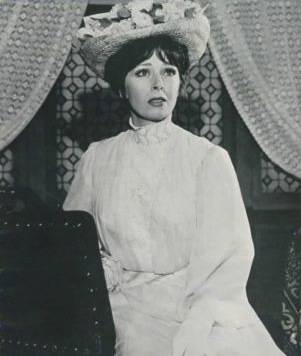 Judith Bruce (Man of Magic, 1966): Judith Bruce played Bess in the 1966 London stage musical, Man of Magic, where she received equal billing with leading men Stuart Damon (Houdini) and Stubby Kay. Bruce appears to have been one of the few highlights of the production, which closed after only 135 performances. Said one review: "At least Man Of Magic provides an opportunity to enjoy Judith (previously Judy) Bruce, one of the lost stars of the British musical theatre, understudied in the show by her sister Lucy Winters. Bruce, who during rehearsal balked at some of the frightening stunts she was asked to participate in (Fielding pooh-poohed her objections, but demurred after taking her place under a giant sawing pendulum) has a glass-edged attack in her opening number 'Floral Sisters' (with a sassy Gaye Brown), and brings her rare quality to everything she does, even if her three solos are unworthy of her."

Sally Struthers (The Great Houdinis, 1976): As much as I love Janet Leigh, I actually think Sally Struthers delivered the best performance as Bess, and probably came as close to capturing the real woman as we will ever get. Struthers seemed to embody the eerie combination of little girl and dark woman that Bess Houdini really was. This is because a better picture of Bess was starting to emerge in 1976. So in The Great Houdinis, we get a strong-willed, showbiz savvy Bess, dealing with always being the second most important woman in her husband's life. Along the way she develops a taste for alcohol and throws out more than a few curse words. Check. And while it’s up for debate how much open tension (if any) existed between Bess and Mama, I think anyone who knew Bessie Houdini would recognize her in Sally Struthers. It's a strong performance and an honest and empathetic tribute. And as Minnie says at the end of the film, "I believe the son-of-a-bitch loved her."

Viviane Thomas (Houdini - A Circus Opera, 1979): Viviane Thomas played Bess when the Dutch production, Houdini - A Circus Opera, when it had it's U.S. debut at the Aspen Music festival in August 1979. Unfortunately, the reviews didn't have much to say about Thomas, instead they focused on Houdini, who was played by three different actors in the course of the evening; tenor Jerold Norman, dancer Daniel Lordon, and escape artist Mark Mazzarella (only 19 at the time). It is noted that at the end Bess gets to sing a dramatic solo number to her husband's departed spirit, saying that "Death is the door from which you will never escape." Door? They couldn't come up with a better metaphor than Door? Maybe something was lost in the translation. Jenny Veeninga played Bess in the original Dutch production in 1977.

Stacy Edwards (Houdini, 1998): Each actress who has played Bess needs to accommodated themselves to the tone of the film, and I think Edwards does this marvelously in TNT's HOUDINI. Edwards gets to play both the sunny-sided Janet Leigh version as well as the later more tormented Sally Struthers take. But what Edwards brings that Struthers and Leigh didn't was a Bess who has showbiz ambitions of her own. Suppressing these dreams become part of her inner demons. That's a new aspect to Bess's character that could indeed be an accurate new insight.

Performance wise, Edwards is superb. She especially knocks it out of the park during the final scenes when Houdini comes back to her (or does he?). In abilities, Janet Leigh and Sally Struthers matched the actors who played their more famous husband (no small task when considering the charisma and acting chops of Tony Curtis and Paul Michael Glaser). But in Stacy Edwards' case, I believe she's the first Bess to surpass her Harry.

Kim Lores (The Great Houdini, 1999): Chicago native Kim Lores played Bess on stage in the 1999 London Theater Works production of The Great Houdini with the great Jim Bentley. Lores and Bentley recreated several Houdini effects during the course of the show, including, as you can see on the right, Metamorphosis.

This was one I was fortunate enough to see when it played The Stella Adler Theater in Hollywood. From what I recall, the attractive Ms. Lores did a terrific job as Bess. In fact, I think by the time the evening ended, I had developed a Janet Leigh-level crush on her. How could I not? She was Bess!

, her photograph does. Oddly enough, the filmmakers elected to use a photo of an unknown actress instead of a photo of the real Bess. So who is this mystery Bess? Afraid I don't have the answer. Do you?

My apologies to any other actresses who didn't make the list. These are the performances that I'm familiar with, but I'm certain there are scores of other Bessie's out there, particularly on stage. Please feel free to post any missed names and performance in my Comments.

This weekend we are Wild About Bess.

UPDATE:
Kristen Connolly (Houdini, 2014): The latest actress to play Bess is Kristen Connolly who starred in the 2014 Houdini miniseries opposite Adrian Brody. Connolly is a beautiful and talented actress who had to work against screenwriter Nicholas Meyer's surprisingly chauvinistic script which presents Bess as ill-tempered and dim. Much is also made of Bess' pot-smoking and alcohol use in this dramatization, and at one point the filmmakers wanted to make her Irish (!). Despite this, Connolly is still able to shine, and in full costume and makeup, she truly channels Bess Houdini.
Written by John Cox at 2:06 PM