Spook Shows were a relatively short-lived phenomena during the 30s, 40s, and 50s. Held mainly in small town movie houses, they combined live magic, seance trickery, gore, monsters, girls, and of course their famous "blackouts" -- when all the lights would be turned off and the theater would erupt in screams. I've always loved the idea of Spook Shows, and there's a fair amount of Spook Show nostalgia out there.

A seller on eBay is currently offering this lot of Spook Show posters. The description is typically vague, calling these "original" and of "recent origin" in the same breath. But among the batch is a poster for an "All-Nite Magic Spook Show" featuring Houdini's films. Pretty cool if this were a real poster for an actual Houdini Spook Show, but it has one major tell. 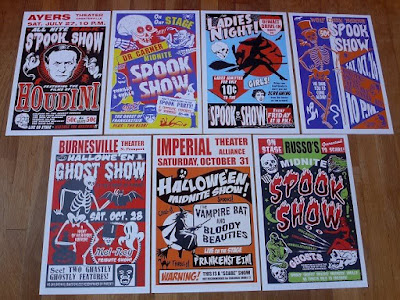 Looking closely at the list of the familiar Houdini film titles we can see, The Soul of Bronze. A lost Houdini movie maybe!?

Unfortunately, no. As was first uncovered here, The Soul of Bronze was a 1917 french film entitled L’ame du bronze. Houdini acquired it with plans to add English inter-titles and distribute it through his Mystery Pictures Corporation. The U.S. film copyright record lists this title among Houdini's film work, hence it tends to show up as a "Houdini" film in encyclopedias and such. Lee Jacobs even once listed it on the back of a King of Cards reproduction in the early '80s, which had me wondering about this title for years!

Still, it a great looking poster -- as are all of these -- and I actually like that it includes The Soul of Bronze. That tickles my collector's bone as a desirable "error." But $50?

Blackout!
Written by John Cox at 8:50 AM