Review: Edge of the Unknown throws Houdini into gritty action 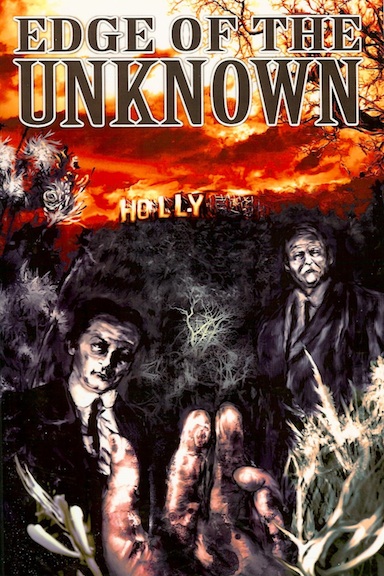 I've just finished Edge of the Unknown, a new graphic novel by Jon Vinson with illustrations by Marco Roblin and lettering by E.T. Dollman. This is definitely one of the best Houdini-Doyle mash-ups, as well as one of the better Houdini graphic novels.

The book is set in Hollywood in 1923 and finds Houdini, Arthur Conan Doyle, and H.P. Lovecraft investigating a series of grisly cult-like murders. I won't spoil the story. It's enough to say it's a very well crafted Noir mystery with a nice dash of the supernatural. Houdini is an action man throughout, engaging in fisticuffs and even a car chase. He only performs one signature escape, but it's at just the right moment and is logically motivated. His final feat, in which he utilizes his skills at being suspended by his ankles, is nothing less than sensational.

The story is a treat for those who enjoy L.A. settings (as do I). It's extremely well researched with many nods to L.A. landmarks, both familiar and obscure. I particularly love how the HOLLYWOODLAND sign is being constructed during the course of the story. I was also pleased to see a cameo by Lon Chaney filming The Hunchback Notre Dame

when Houdini visits Universal Studios (what a year 1923 was). 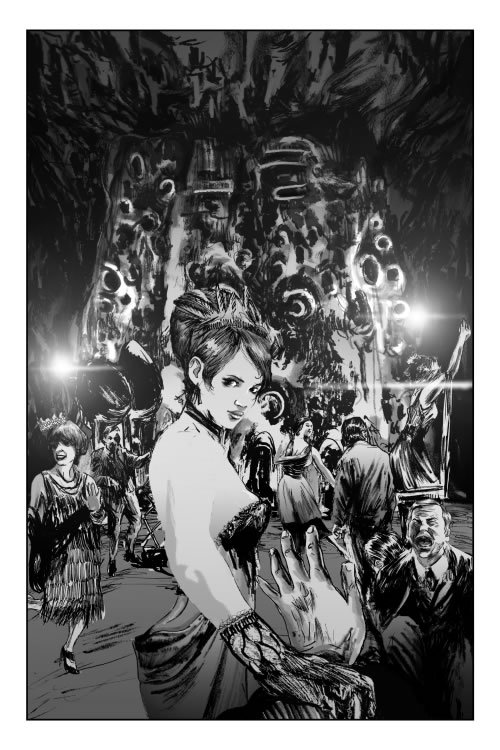 There is also plenty of insider info for the seasoned Houdini buff to enjoy -- such as nods to his relationship with Weird Tales magazine and the Houdini Picture Corporation. Of course, in realty, the Houdini Picture Corporation was a New York based operation founded after his relatively brief Hollywood experience. But this doesn't bother me as Houdini's personal dilemma whether to continue with his sagging Hollywood movie career or admit failure (for the first time) and return to New York with Bess makes for a very nice story arc. I also like how Bess complains that the climate of L.A. doesn't agree with her. Not sure whether this is a deliberate nod to Bessie's always delicate (psychosomatic?) health issues, but it works.

The black and white illustrations are all moody and beautiful, with some mixing in Houdini photographic elements. Unlike other graphic artists, Marco Roblin draws Houdini at his correct age and build instead of opting for a more superhero look, grounding him in a gritty reality that is exactly right for the story.

The book also contains an Appendix in the back explaining the historical connections of significance of certain scenes and events in the story, something I really appreciated and enjoyed.

Edge of the Unknown is quite adult, featuring generous amounts of gore, nudity, and language, so this isn't one for the youngest kids. But this is definitely a book for those who enjoy Noir mystery, Houdini, and graphic novels in general. There's also a tease at the end for Edge of the Unknown 2. I say bring it on!

Edge of the Unknown can be purchased at Indy Planet. Also be sure and take advantage of artist Marco Roblin's special offer.
Written by John Cox at 9:56 AM