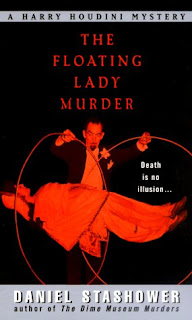 At the turn of the century (this century -- feels weird to say that) Daniel Stashower wrote three fictional "Harry Houdini Mystery" novels. I love Houdini fiction, and these books were each a delight, but the best of the batch for me was the second book in the series, The Floating Lady Murder

Among the things that I so enjoyed in this book was how Stashower took Houdini and Bess on a very clever alternate historical tract. Most are familiar with the story that during his struggling years Houdini sent a letter to Harry Kellar volunteering his services as an assistant. This didn't pan out, and Houdini went on to bigger and better things (to say the least). But in Floating Lady, Kellar accepts Houdini's application and he and Bess join the Kellar show.

Of course, a murder occurs, and Houdini, Bess, Dash, and Kellar are all plunged into the mystery.

You can still get The Floating Lady Murder on Amazon along with Stashower's other Harry Houdini Mysteries, The Dime Museum Murders

and The Houdini Specter

. All were released as paperback originals. The Houdini Specter was also released as a bookclub hardcover

. The December 1999 Genii magazine profiled Stashower and his first book with a nice cover story.