"This is a Houdini night, with the spotlight of the public on Houdini; with the whole world paused to see or hear Houdini step on this side of the curtain." - Edward Saint


Today is the 88th anniversary of the death of Houdini. Today also marks the anniversary of The Final Houdini Seance on October 31, 1936. This was Bess Houdini's tenth and final attempt to contact her husband from beyond the grave, and it was held with great fanfare in Hollywood 78 years ago tonight. So instead of a post today about Houdini, I thought I'd look back at this first public Houdini seance and the first posthumous Houdini mega event.

Plans for The Final Houdini Seance were first revealed in April of 1936, and the original conception was quite different. Bess and Edward Saint (her business manager and partner) announced that the seance was to be held on a mountaintop -- "as near the heavens as possible" -- and the idea was to not only contact Houdini, but Howard Thurston and Charles Carter as well. (Thurston had died that month.) The widows of both famous magicians would participate.

Said Bess, "Now that Houdini, Carter and Thurston have joined forces on the other side of the grave, I am going to make, here in Hollywood, the one supreme effort to contact these great magicians and maybe together one of them may 'come through'." 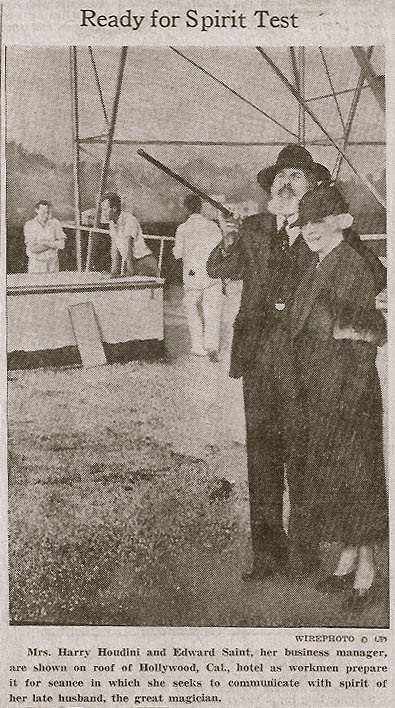 Eventually the idea of a 3-ring seance was abandoned and the focus narrowed to Houdini. The location also shifted from the proposed mountaintop to the roof of the Hollywood Knickerbocker Hotel on Ivar Street off Hollywood Blvd. There was also talk of a national radio hookup to broadcast the seance live, but it's unclear if this happened.

Golden invitations were sent to some 300 guests and reporters, and Saint worked tirelessly to promote the seance. He even petitioned (unsuccessfully) to have the lights of New York's Broadway dimmed and one minute of silence observed on Halloween as a tribute to Houdini. A week before the seance, Ed and Bess checked into a suite at the Knickerbocker. Bess wrote to her niece Marie (Blood) that she was "all a jitter about it--and will be so glad when it is all over."

According to William Larsen Sr., who would make up part of the Inner Circle and later toured with a lecture about the seance, the night was uncommonly cold -- "most of the invited guests were as numb as though they'd been dead as long as Houdini" -- and some of the attendees "had the foresight to prepare for the occasion by stopping in at the Knickerbocker cocktail bar." There was also a private offer made to Saint by local magicians, as Larsen recalls:

Now it seems that Dr. DiGhilini, a well-known West Coast mystery worker and a few other outstanding magicians didn't really believe anything was going to happen. They feared that the invited guests and the waiting world were doomed to bitter disappointment. So, they offered their services to help better matters. It would be excellent, they told Dr. Saint, to get Houdini's handwriting on the slate and they could assure its appearance there. Or, to cause a dove to fly up from the center of the table, seemingly created out of nothing. Dr. Saint refused these generous offers. The seance was to be conducted on a strictly legitimate lines. The tricks of the conjurors were taboo.


The rooftop has been carpeted for the event and bleachers set-up for the public and reporters. The seance table was set near the edge of the roof with the HOLLYWOODLAND sign (as it read in 1936) visible behind Bess and Ed, who sat side by side in two large chairs. On the table before them were the famous Mirror Handcuffs interlocked with another pair of cuffs, a bell, and a spirit trumpet. Between them sat "The Houdini Shrine" with a light bulb that burned red above a portrait of the great magician.

From the start, the seance was promoted as being a "worldwide" attempt to contact Houdini, and Saint arranged for 12 other seances throughout the United States, Canada, England and Australia to begin at the exact same time. Hardeen was heading up a circle in New York City, and Houdini's longtime British agent Harry Day oversaw a circle in London.

At 8:30, the proceedings began with the playing of Pomp and Circumstance (the music which opened Houdini's full evening show). Inner Circle attendee Caryl Fleming later described the dramatic moment for Goldston's Magical Quarterly:

A majestic march emanating from the concealed speakers of a powerful public address system broke the silence--all lights on the roof were extinguished except the ruby light over the shrine--the members of the inner circle rise to their feet--the assemblage does likewise--all standing at attention while the little widow, Mrs. Beatrice Houdini was ushered to her place and seated by her manager, Edward Saint, a life-long friend, who then took his place, the music died down and all reseated themselves and then --- silence -- hushed almost oppressive hopeful silence.


Saint then begin the seance, pleading with Houdini to give a sign. During the proceedings, Saint mentioned a hidden "locked vault" that contained valuable papers and a lapel given to Houdini by Harry Kellar. The vault had not been located, and Saint asked the spirit of Houdini to reveal the secret location. (This vault remains a mystery to this day.)

Saint begged Houdini to appear for over an hour. Fleming records that, "Dr. Saint spoke, his voice rising to a mad, sobbing pitch. Sobs could be heard too from some of the friends in the audience." Bess would later say, "He invoked, and he invoked--good Lord, how that man invoked." During a lull, one paper reported that the sound of a saxophone could be heard "sobbing" from the street below.

Saint: Mrs. Houdini. The zero hour has passed. The ten years are up. Have you reached a decision?"

Bess: Yes. Houdini did not come through. My last hope is gone. I do not believe that Houdini can come back to me, or to anyone. After faithfully following through the Houdini ten year compact, after using every type of medium and seance, it is now my personal and positive belief that spirit communication in any form is impossible. I do not believe that ghosts or spirits exist. The Houdini shrine has burned for ten years. I now reverently turn out the light. It is finished. Good night, Harry.


With that Bess closed the doors on the Houdini shrine, which extinguished the red light, and she left the rooftop escorted by Saint. It was then that it began to rain from what had been a clear sky. The rain lasted just long enough to drench those left on the rooftop, and then it suddenly stopped. Larsen remembers:

To people who do not live in California, this may not seem strange. But California does not have "showers" as do the East and Mid-West. The country is rainless for months. When rain comes, it rains for days. A brief, heavy rain is an unheard-of phenomena. Was it a sign? Were the Gods displeased? Was Houdini displeased? Probably it meant nothing for the newspapers failed to mention it. Still, I often wonder.


So was the Final Houdini Seance on the level? Arnold Furst said when asked what they would have done had Houdini returned that night, Ed and Bess laughed, and Ed said: "Bess would have dirtied her pants if that had happened!"

Just like seances held today, the Final Houdini Seance was a mix of sincerity and self promotion. While Bess had spoken of their being a "compact" between her and her husband, there was never a time frame given, and the idea of a 10-year cut-off was probably invented for this seance. It also appears this was the first Houdini seance held on Halloween. Records of other seances held by Bess in New York show them taking place in the Spring.

Bess and Ed had also recently set-up a movie about Houdini at Paramount. The Final Houdini Seance might have been an attempt to show the studio that Houdini was still relevant and a part of the popular imagination. In this regard, it was a great success. The seance did make headlines across the country. (It would still take 17 years for the Houdini movie to be made.)

As might be expected, the seance drew some criticism from spiritualists. Dr. Ed James Irvine wrote in The Billboard: "It was absurd to try to communicate with the spirit of Houdini recently when there was an audience of more than 200 morbid curiosity seekers knowing little or nothing about psychism. Inasmuch as Houdini manifested himself to Mrs. Houdini through Arthur Ford, a New York medium, on a previous occasion, I do not see why it is necessary for his spirit to come back again in order to give proof of spirit return."

The Final Houdini Seance was recorded and released by Thayer Magic on an LP narrated by George Boston. It's likely what we hear on the record was actually done in the studio after the seance and not a recording from the rooftop, which would not have yielded clear audio. This might explain why Bess's closing words are sometimes quoted differently in press accounts than from what we hear on the recording. The record was re-released by Hudson Records in 1959 and again by Mark56 in 1975.

In 1986, a special 50th Anniversary reenactment of the Final Houdini Seance, organized by Manny Weltman, was held at the Variety Arts Center (a sister club to the Magic Castle), which I had the pleasure of attending. Bess was portrayed by original seance attendee Geri Larsen (Jaffe) and Edward Saint was played by Stefan Krayk. True to the script, Houdini failed to return.

Today The Knickerbocker Hotel still stands in Hollywood and looks much as it did in 1936. It is now a private retirement home and is closed to the public. (Yes, I have tried to get on the roof, and, no, it isn't happening.) For many years a photo of Houdini graced the wall of the hotel's restaurant.


Ironically, what was supposed to be the "final" Houdini seance kicked off what has became a cottage industry of Halloween Houdini seances that continue to this day. This year seances will be held in Danvers, Scranton, Las Vegas, Sonoma, York, and dozens of other locations, both public and private. While some claim to be a continuation of the "official" or "original" Houdini seance, the truth is there is no true continuation. Part of the intent of the Final Houdini Seance was to put an end to such attempts and close the chapter on Houdini's own investigations into the possibility of spirit communication. As Bess said herself, "It is finished."

But the Houdini seances today are, paradoxically, more about celebrating the life of Houdini, and also about having some spooky fun on Halloween. In this way, I guess they are indeed continuations -- inspired by and modeled on Bess and Edward Saint's flamboyant and famous Final Houdini Seance of 1936. 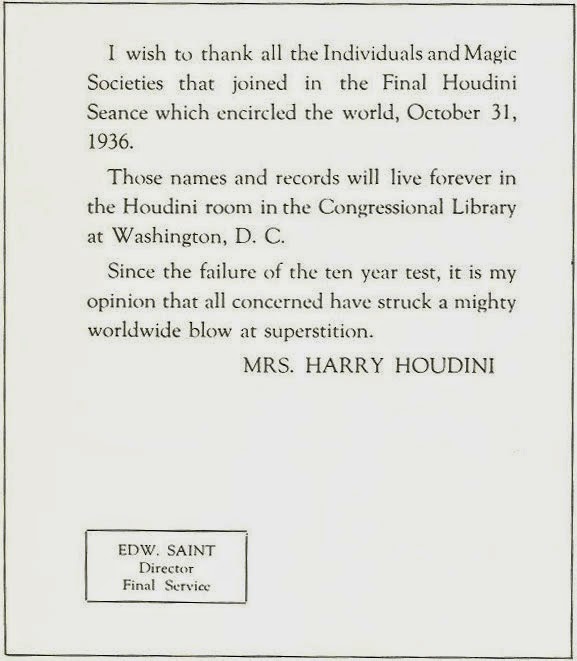 Thanks to Mark Willoughby for the use of the remarkable unpublished photos of the Final Houdini Seance from his collection.

You can listen to the recording of the Final Houdini Seance at Tom Interval's Houdini Museum YouTube Channel.