I'm pushing our regular Monday installment of "Unpublished Houdini" to tomorrow so I can bring you another treasure from the Hinson family collection which marks its 100th anniversary today. This silver punch bowl was given to Houdini by his assistants on October 28, 1913 in Stuttgart to commemorate his 30 years as a performer (1883-1913). The punch bowl is inscribed with the names: J. Collins - J. Vickery - F. Kukol - J. Zwettler. While the first three names are familiar ones, this is the first I've heard of an assistant named Zwettler. 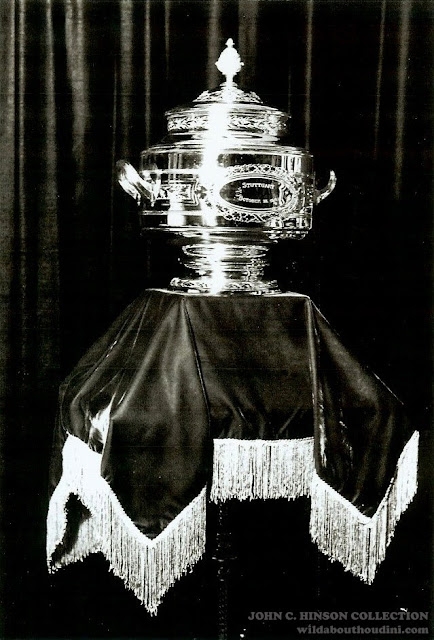 This magnificent punch bowl can be spotted among Houdini's trophies in several photos (like this one). In the 1930s Bess passed it on to her sister, Marie Hinson. According to John C. Hinson, the family used it to store nuts and bolts until his father received it in 1950. The bowl passed to John in 1992 and was actually used at the New England Magic Collectors Association convention that year. It is now on display at Ray Goulet's Mini Museum of Magic in Watertown, Massachusetts, where it can be seen and enjoyed by all.

So I guess that means today is the 130th anniversary of Houdini as a performer. Let's fill up the punch bowl and celebrate!
Written by John Cox at 10:36 AM