Here's an unpublished photo of Houdini with Thomas Meighan and Jack Pickford in Hollywood. Meighan was a major star with Famous Players-Lasky; at one point he earned $10,000 a week. Jack Pickford was the brother of silent movie superstar, Mary Pickford. The men shared a connection in that Meighan was the sole witness to Jack's secret marriage to Ziegfeld Follies girl Olive Thomas in 1916.

This casual shot taken before a series of photos of the actors subjecting Houdini to several rope tie challenges. Those photos appeared in Houdini's 1921 book, Magical Rope Ties and Escapes. 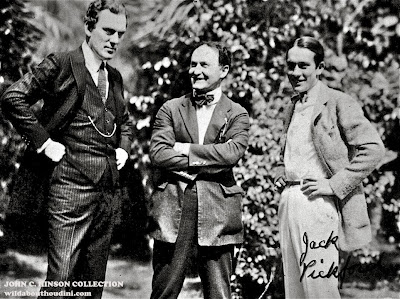 "During one of my engagements at the Lasky studio, in California, that popular leading man, Tom Meighan, who established a lasting reputation by his admirable work in the screen production of the The Miracle Man, told me of a tie that was formerly used to secure an Indian who had imbibed too freely of "fire-water."

I am led to believe that he carried the process considerably farther than was the custom in the case of the bibacious aborigine, but I succeeded in freeing myself in less than four minutes."

What I like about this unpublished shot is it reveals the encounter wasn't quite as serious as the published photos below portray. Acting! 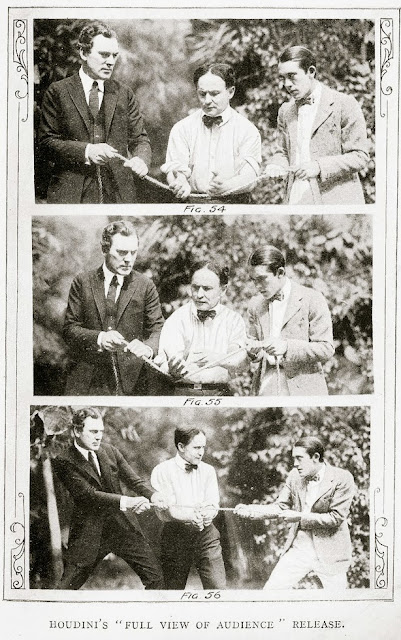 Next week we'll head into the portrait studio for an image of Houdini that just feels right as we approach Halloween...

Also enjoy:
Bound at Last
The ladder tie
Man of action
Written by John Cox at 8:00 AM