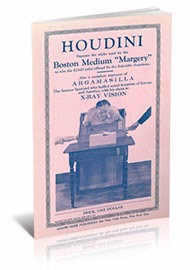 Do the dead return? Houdini says NO and proves it!

Today's "Houdini-Palooza" offering from the Conjuring Arts Research Center is Houdini's 1924 pamphlet, Houdini Exposes the Tricks of the Boston Medium "Margery". The FREE PDF is available for the next 24 hours from the CARC online store.

It's not generally known that Houdini published this detailed exposé of the methods used by Mina Crandon (a.k.a. "Margery") during their famous sessions in Boston before the Scientific American committee had announced their final verdict on her mediumship. Houdini had become impatient with the committee and suspicious that several members had developed compromised relationships with the Crandons. Houdini took it upon himself to published his own conclusion that Margery's mediumship was all accomplished by tricky. The committee later announced a similar conclusion and denied Margery the $2,500 prize.

All this week the Conjuring Arts Research Center is offering a free Houdini book every day leading up Halloween. Each new title becomes available 1:26pm (EST) and is available for only 24 hours. Additionally, all Houdini items at the CARC store are marked down 50%.