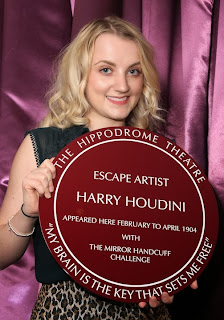 A plaque commemorating Houdini's historic performances at the Hippodrome Theater in London was dedicated yesterday at what is now The Hippodrome Casino. The casino recently converted the historic space and restored many of its classic features.

Actress Evanna Lynch and cast members from Houdini The Play were on hand for the dedication. Evanna plays Bess in the stage production currently at the Windsor Theatre Royal through October 5th (she also starred in a few movies about another famous wizard named Harry).

Also part of the dedication ceremony were a pair of authentic Houdini handcuffs on loan from The Magic Circle in London. The cuffs are said to be valued at £15,000.

Of course, the London Hippodrome was the site of Houdini's famous Mirror Handcuff Challenge escape on March 17, 1904. The plaque commemorates that escape and also includes Houdini's famous quote: "My brain is the key that sets me free."

Below are photos of Evanna with Simon Thomas, CEO of the Hippodrome Casino, and fellow cast member Jamie Nichols who plays Harry in Houdini The Play.


Thanks to Ian Hayworth for the photos and information. For more on The Hippodrome Casino visit their official website.

For tour information and to book tickets to Houdini The Play visit houdinitheplay.com.
Written by John Cox at 2:01 PM