Houdini's connections to the famous silent movie comedian Buster Keaton are well-known. Harry and Bess performed with Keaton's parents in their early days, and lore has it that Houdini gave the comedian his famous nickname after seeing baby Buster take a fall down a flight of stairs.

Now reader "JC" has altered me to another Houdini-Buster connection. Keaton's classic 1922 short COPS starts off with a quote from Houdini: "Love laughs at locksmiths." 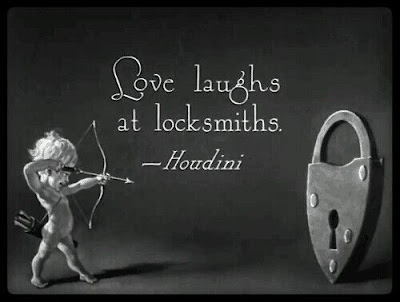 COPS features Keaton evading the entire Los Angeles Police Department in a series of comedic set-piece escapes. Maybe this is why the movie starts with a Houdini quote? Or maybe this was Buster's way of retuning the favor of famous name. It could also be that the attribution of this Shakespearean proverb to Houdini is a joke in itself.

In 1997 COPS was selected by the Library of Congress for preservation in their National Film Registry. So this cinematic nod to Houdini from the great Buster Keaton will now live forever. 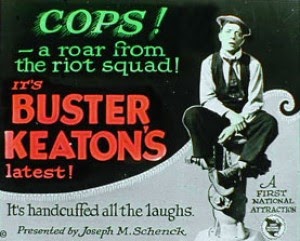 You can watch COPS in its entirety on YouTube (Houdini quote is at 0:21).