Enter the world of Norman Bigelow 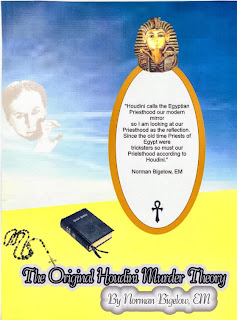 Our friend and legendary escape artist Norman Bigelow isn't afraid of controversy when it comes to Houdini. Indeed, Norm has made it his mission to tackle the most controversial aspects of Houdini life and career, especially in regards to his death, spiritualism and religion.

In 1983 Norm self-published Death Blow, which introduced many to the Houdini murder theory. In recent years Norm has written a follow-up, The Original Houdini Murder Theory, along with new offerings, Houdini's Final Message To The World, and Mind Reading.

Norm is now offering PDFs of all his latest Houdini essays at his new official website, houdinivschristianity.com. Have a read and...believe.
Written by John Cox at 8:21 AM