Houdini books return to 'Mysteries at the Museum' 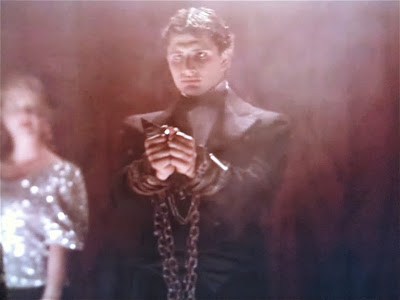 It was just last week that The Travel Channel's Mysteries at the Museum had a segment about Houdini and Margery. Last night the show featured another magic-themed segment; this time about Robert-Houdin and his famous Light and Heavy Chest. As with the Margery bell box, the original Light and Heavy Chest is housed in the private collection of Ken Klosterman, the Salon de Magie, in Loveland, Ohio.

Once again the show did a good job telling the story of how Robert-Houdin stopped an uprising in Algeria with his magnetic magic trick. The magic historian was again Gabe Fajuri.

Of course, it's hard to talk about the legacy of Robert-Houdin without mentioning Houdini, and at the end of the segment that's exactly what happened. The fact the Robert-Houdin inspired Houdini's stage name was mentioned over footage of an actor playing the Handcuff King (above). Interestingly, it was different footage (and a different actor?) from anything that was used in the Margery episode.
Written by John Cox at 7:28 AM