The man who lives in Houdini's house

The New York Daily News has an article about 71-year-old Fred Thomas who owns the greatest Houdini collectible of them all -- his house! The article includes this tantalizing photo of Thomas inside the foyer of 278. If those stairs could talk.

Here is the article in full: 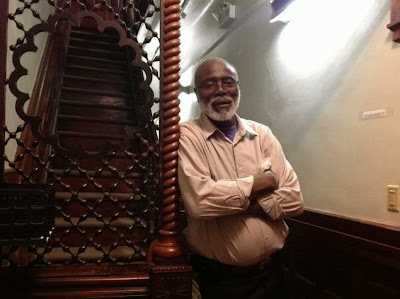 Owner of 'Houdini House' on W. 113th St. wishes fans of the magician would stop coming in droves. Traffic picks up around Halloween, the day of the conjurer's death.

Fred Thomas, 71, lives in the famous “Houdini House” on W. 113th St. in Harlem — which becomes one of the city’s premiere tourist attractions every Halloween, the anniversary of the master magician’s 1926 death.

And Thomas has had enough.

"The lady who sold it to me never told me Houdini lived here. The neighbor told me after I moved in," said Thomas as he led The News on a rare tour. "People are always outside talking pictures of the house. I've developed a callousness.”

At the peak of his fame in 1904, Houdini, the stage name of Budapest-born escape artist Ehrich Weisz, bought the four-story house for the then-fantasmagorical price of $25,000. The magician and his wife Bess stayed uptown for two decades until his death.

By the time Thomas bought the place in 1991, the tools of Houdini’s spellbinding trade — shackles, handcuffs and the like — were long gone.

So if you’re looking for lingering magic, don’t bother, though Thomas kept some original features of the 19th-century house between Frederick Douglass and Adam Clayton Powell Blvds.

"I wanted to keep things original," said Thomas, though he quickly dispelled the main reason mystics flock to the building every Halloween: "There are no ghosts. There are no spirits," he said.

The good news is that Houdiniphiles can still gape at the illusionist’s memorabilia at the ad-hoc Houdini Museum of New York inside Roger Dreyer’s midtown magic shop near Herald Square.

Dreyer, 52, started his 3,000-item collection as a teen buying the goods from various magicians who were close to the elite family.

The best items are Houdini's "Siberian Chain Escape," a 12-inch steel rope which would wrap around the magician's wrist; and the "Metamorphosis Trunk," a four-foot-wide piece of luggage that Houdini used to trap himself inside.

"Harlem birthed some of the city's top entertainers," Dreyer said. "And during the early 20th century, no one was bigger than Houdini."


For more about Houdini's Harlem home, click here to read about my own visit to the house. Sorry, Mr. Thomas!
Written by John Cox at 6:09 PM