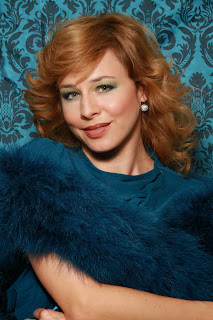 The 40-year-old Ónodi is a native of Budapest. She's done extensive work in movies, TV, and on stage. In 2000 she won the Cosmo Grand-Prize as the Best Hungarian actress of the year.

It's interesting that they would cast a younger actress in the role of Houdini's mother. This suggests that maybe Houdini will contain more scenes of when Houdini was a child than we normally get in biopics. Of course, Angela Clarke was only 44 when she played Mama in Paramount's 1953 Houdini, so...

The site also reports that filming began on October 14 (not Sept 30th as I reported) and will spend 45 days shooting at MaFilm and Korda Studios in Hungary. Pioneer–Stillking Pictures -- a partnership between Prague-based Stillking Films and Budapest-based Pioneer Pictures -- is co-producing with Lionsgate and A&E Studios.

Stillking producer David Minkowski told FNE: "The combination of story, locations, tax incentives, and Houdini's Hungarian roots was a plus. It all made sense" to shoot in Hungary.

Houdini stars Adrien Brody as Houdini and Kristen Connolly as Bess. It's being directed by Uli Edel from a script by Nicholas Meyer. Houdini will air on History in 2014.
Written by John Cox at 8:58 AM