Welcome to Unpublished Houdini. In this series I share a new never-before-published photo of Houdini every week from our generous Hinson Endowment.

This week I offer up a special treat along with a mystery. Here are two unpublished shots of Houdini which appear to go together. The question is; what's going on here? Even our benefactor, John C. Hinson, doesn't know what these rooftop shots are all about. 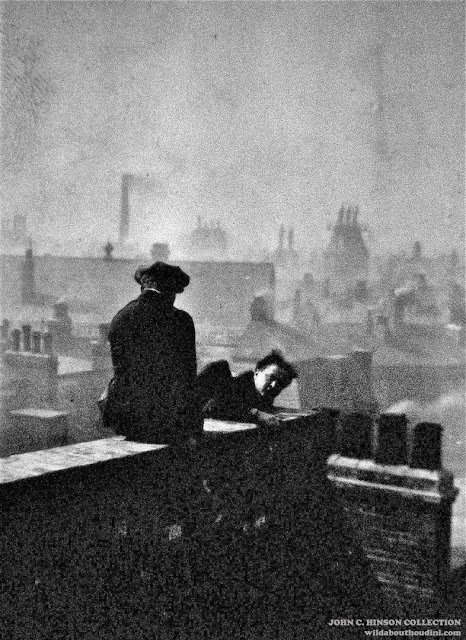 At first I was excited that what we may have here are images captured during one of Houdini's "human fly" stunts. It's not generally known that Houdini sometimes engaged in non-escape related acrobatic stunts, such as scaling buildings. He even once climbed the exterior of 278 to bring Bess flowers on their anniversary. Houdini performed at least one human fly stunt during his return tour of the UK in 1920 when he climbed to the top of a castle in Newcastle and dangled from the parapet. These rooftops do appear to be European...so does the above photo show Houdini coming over the top of a building ledge with an assistant there to help?

But then when I paired the above image with this second shot of Houdini astride a chimney, I started to think that these photos don't capture a human fly stunt after all. Instead these appear to be Houdini engaging in movie-like "action." But this also ties into his 1920 European tour. 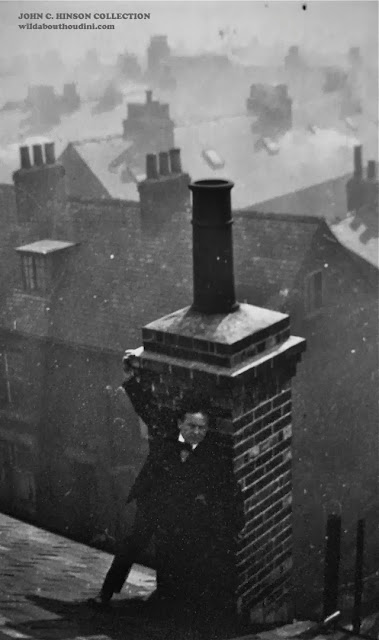 "The Movie Fans are clambering for another Houdini serial, and as that is much easier than my Self created hazardous work, I may step that way."


Houdini embarked on this tour at the height of his movie career and went out of his way to present himself as a freshly minted movie star. He also brought along a movie camera and shot random scenes in London, Edinburgh and Paris for a movie he was going to call The Dupe. Some of that footage was later used in Haldane of the Secret Service. But some footage was never used.

So could these be photos taken during some "action scene" shooting? Maybe what we're seeing in that first photo is not Houdini come over a rooftop, but struggling to hold on as a thug tries to kick him off.

These could also be posed shots for later use. There are other examples of these, notably a series of shots taken in Paris, one showing Houdini defending himself against a thug with a broom in front of Notre-Dame. Trouble is, these rooftops photos were both badly overexposed, so Houdini's day of high altitude action was for not.

Well, not entirely. Because thanks to a little Photoshop magic and the foresight of the Hinson family to hold onto these shots, today we can all enjoy Houdini's rooftop action. Douglas Fairbanks eat your heart out!

Speaking of movies, next week we will take a trip to the glamour capitol itself...

Also enjoy:
Bound at Last
The ladder tie
Written by John Cox at 8:12 AM