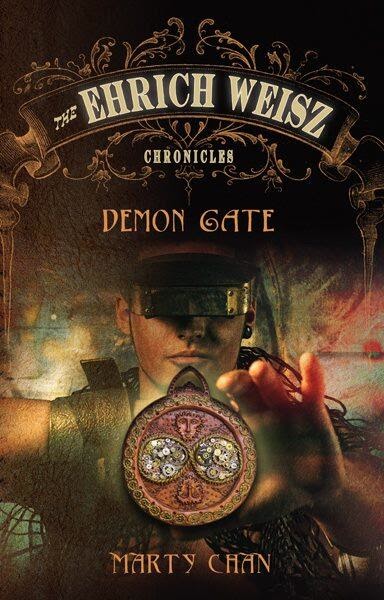 Here's a Halloween treat. The first book in a new teen fantasy series about the adventures of a young Harry Houdini has just been released. The Ehrich Weisz Chronicles: Demon Gate is written by Marty Chan and published in paperback by Fitzhenry & Whiteside. Here's the description:

When young Ehrich Weisz — the future illusionist, Harry Houdini — follows his brother, Dash, through a strange portal, he is thrust into an alternate New York where the immigrants aren't just different ethnicities but different species. He finds work in this strange steampunk world as a Demon Hunter, tracking down dangerous otherworldly visitors that threaten the city's safety, while hiding his own foreign origins. A curious medallion, his only clue to finding his brother, leads Ehrich to a mysterious woman caught up in inter-dimensional intrigue, and he must learn who to trust as he unravels the truth if he ever wants to find his way home.

First of a new series, The Ehrich Weisz Chronicles, by the award-winning Marty Chan.

Marty Chan is a playwright, radio writer, television story editor, and the author of several young adult novels and picture books, including The Mystery of the Frozen Brains. Marty was the first playwright in residence at the Citadel Theatre. He also served as Chair of the Edmonton Arts Council and taught playwriting at the University of Alberta. He received an Arts Achievement Award and a Performance Award from the City of Edmonton. Demon Gate is his first teen fantasy novel.