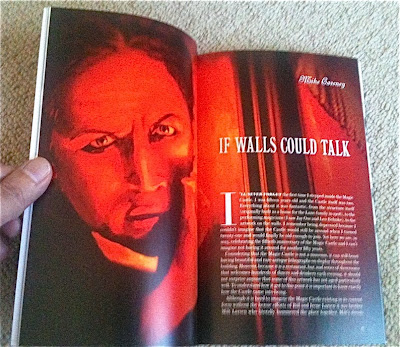 The new issue Magicana's Magicol (No. 185) is out now, and there's plenty of Houdini peppered throughout the pages of this long-running quarterly devoted entirely to magic history and collecting.

This issue celebrates the 50th Anniversary of the Magic Castle in Hollywood with an excellent overview of the Castle's history by Dustin Stinett and a terrific article by Mike Caveney about the posters inside the Castle. Mike points out how a 3-sheet Horace Goldin "Tiger God" poster, used to wallpaper the ceiling of the men's bathroom (magic posters were cheaper than wallpaper back in '63), today sells for $4000. Contemplate that next time your in there doing some thinking.

There's also well-illustrated article by Bill Goodwin about the William W. Larsen Memorial Library and the treasures it contains, including many signed and annotated books from Houdini's own library (remember this?). 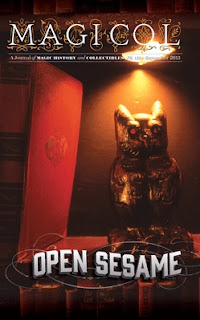 Lisa Cousins has an article on "Castle Collectibles" that gives us a peak at a Friday lunch menu from January 22, 1993 featuring a photo of Bess with Castle co-founder Milt Larsen as a child. This is, I believe, the only time this photo has appeared outside the Houdini Seance Room. And speaking of the seance room, Lisa points out that the original owner of the house, Rollin P. Lane, died in that very room. Maybe that has something to do with the genuinely spooky "vibe" one gets in there (recently experienced, and commented on, by the new Bess, Kristen Connolly).

This issue also includes David Ben's review of The Metamorphosis: The Apprenticeship of Harry Houdini by Bruce MacNab, which originally appeared in the Literary Review of Canada (Vol. 21, No. 2, March 2013), and many other excellent articles and reviews.

You can subscribe to Magicol at www.magicana.com.
Written by John Cox at 3:05 PM