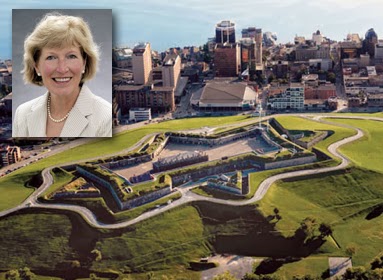 On this Halloween Eve, I have some very exciting news to share about the Official Houdini Seance set to take place in Halifax, Nova Scotia tomorrow. At the seance table will be Karen Mann, the daughter of Jacques ("Jack") Price. Price was one of the three McGill University students in Houdini's dressing room on October 22, 1926 when the infamous blows to Houdini's stomach were struck by J. Gordon Whitehead.

Karen Mann is a PhD and celebrated Professor Emeritus of Medical Education at Dalhousie University, where she was founding Director from 1995-2006. She also is Chair in Medical Education at Manchester Medical School, University of Manchester, UK. In 2010, she received the Merrel Flair Award for Distinguished contributions to medical education in North America.

"I feel very fortunate to be included in this event," says Karen.

Karen's participation definitly adds something special to this year's seance and celebration. The sold-out event is being organized by Bruce MacNab, author of The Metamorphosis: The Apprenticeship of Harry Houdini, and will be held in the catacombs of the historic Citadel Hill in Halifax. (Click here for full details.)

Might Karen's presence be the key that unlocks the door to the spirit world and allows Harry to finally make his greatest escape?

I guess we'll find out tomorrow.

UPDATE 2: Interview with Karen Mann.
Written by John Cox at 11:37 AM