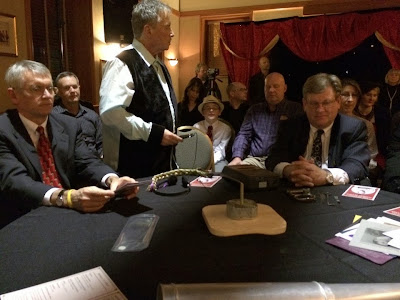 The word from the folks at The Official Houdini Seance in Halifax, Nova Scotia is that despite the best efforts of medium Alan Hatfield -- who employed the use of EVP (Electronic voice phenomenon) -- Houdini failed to return from the dead for the 86th year in a row. The seance was held this year at the historic Citadel Hill in Halifax and was co-hosted by Bill Radner and Bruce MacNab, author of The Metamorphosis: The Apprenticeship of Harry Houdini.

But while Houdini was a no show, the event seemed to be a hit with the attendees. There was magic performances by Margaret Steele, Mister J, and escape artist Lucas Wilson who freed himself from a straitjacket in 47 seconds. Award-winning singer Laura Smith performed The Houdinis favorite song, Rosie, Sweet Rosabel.

Our friend Robert Somerdin, a member of the inner circle, provided us with photos and live updates from the proceedings (which you can view on my Twitter page) and The Chronicle Herald Live Blogged the event. The inner circle consisted of Fred Pittella, Bruce MacNab, Midge Markey, Robert Somerdin, Noella Brennan Fisher, and Dr. Karen Mann (the daughter of Jack Price). They tried for an amazing hour and a half to "pierce the veil" and bring back Harry. The lights at one point did mysteriously flicker, but Houdini himself stayed silent. Still, I'm impressed with this seriousness of this year's attempt.

A very big THANK YOU to Robert Somerdin for providing photos and keeping us all informed throughout the seance. This proved to be an exciting event, even just on the computer.

UPDATE: Photos from The Official Houdini Seance in Halifax