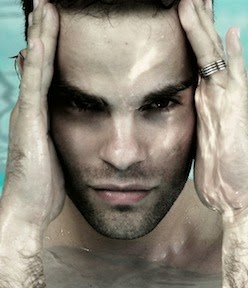 Says David, "It is certainly a privilege and a challenge to be part of such an exceptional cast, preparing the most amazing motion picture ever about The Great Houdini. His magic has been following my whole life and it is now enlightening each day of shoot."

David has performed some truly spectacular escapes in his career, such as freeing himself from the inside of a SCUD missile in flight, being embedded in a block of concrete then thrown in a river, and being frozen in a block of ice while in a straitjacket for 33 hours. In 2007 he was awarded Best Escape Artist at the World Magic Awards in Los Angeles. He is also the holder of the World Record for holding his breath while underwater at 21 minutes, 29 seconds, set in 2009.

You can learn more about David's work at his website: www.merlini.com.


Houdini stars Adrien Brody as Houdini and Kristen Connolly as Bess. It's being directed by Uli Edel from a script by Nicholas Meyer. Houdini will air on History in 2014.
Written by John Cox at 1:08 PM