Official Houdini Seance to be held in Halifax, Nova Scotia 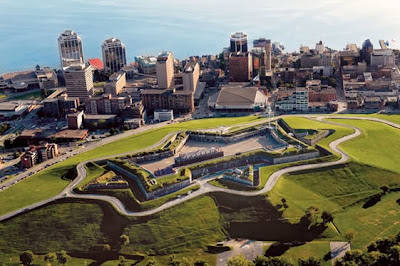 Great news today! Bill Radner informs me that the 2013 Official Houdini Seance will be held in the catacombs of the historic Citadel Hill in Halifax, Nova Scotia on Halloween of this year.

Houdini and Bess performed in Halifax during their first tour of the Canadian Maritimes in 1896. That formative tour is the subject of Bruce MacNab's excellent book, The Metamorphosis: The Apprenticeship of Harry Houdini. Bruce will be co-hosting this year's seance, which is going to have a terrific lineup of guests and performers and will have a limited amount of tickets available to the public.

Bruce says the final details are still being confirmed and a full press release will be released soon. I'll post the details when I get them; but it's always great to hear that the tradition of Sidney Radner's Official Houdini Seance continues.

Click here to read my report on last year's seance in Fort Worth, Texas.
Written by John Cox at 9:42 AM