Welcome to the first installment of Unpublished Houdini. In this series I will share a new never-before-published photo of Houdini every week from our generous Hinson Endowment.

Let's kick off this series with this wonderful playful shot of Harry and Bess Houdini in 1924. Notice they are tied together around the waist. The Houdinis enjoyed taking joke photos like this, especially on their anniversary. It's possible this is their 1924 anniversary (which would have been their 30th). Or maybe it's just a typical day with The Houdinis. Whichever, it's a lovely image to see after 89 years. 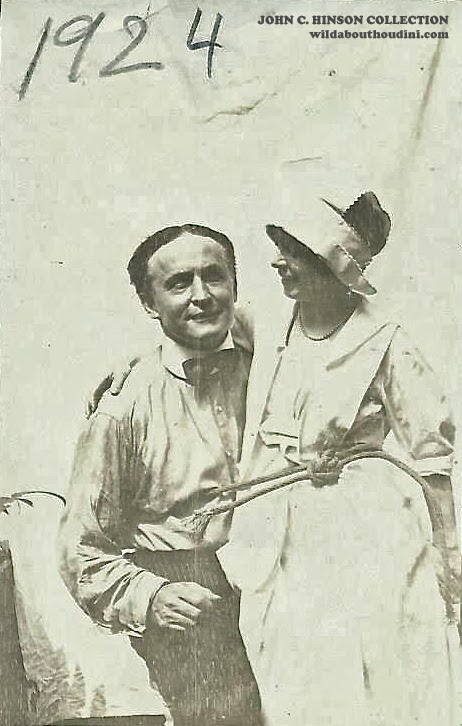 "We have starved, and starred together. We have had our little tiffs but your sunny smile, and my good (?) sense always smoothed out the bitterness. I love you—love you—and I know you love me. Your very touch, your care of me dearest and the laughter in my heart when you put your arms around me prove it. Think dear heart, twenty five years. . . .yours till the end of the world and ever after. Ehrich."

-Note written by Houdini to Bess
on their their 25th Anniversary


By the way, bragging rights to the first person who can identify the double meaning of my "Bound at Last" title. It should be no mystery to a true Houdini buff.

Next week I'll share a photo of Houdini in tight situation that you might think you've seen before. But look again...

Thanks as always to John C. Hinson for allowing me to share this family treasure. And thanks to Tom Interval for the beautiful quotation.
Written by John Cox at 7:55 AM