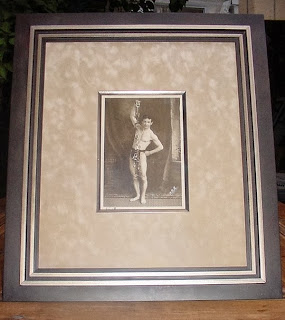 This signed photo of Houdini posing "nude" (apart from loincloth) recently appeared on eBay. It's a familiar shot and part of a series of photos that were used in early Houdini advertising material (like the Mahatma ad below). But what's nice here is this auction tells us exactly when and where this shot was taken.

According to the listing, this photo bares the stamp of the Bushnell company in San Francisco. On the back of the photo Houdini himself has written: "Taken 1899 July -- I was 24 years old." It appears Houdini had first written 1898, but then overwrote a "9", which actually makes him 25.

So this was taken during Houdini's first tour of the West Coast under the management of Martin Beck, which pre-dates his breakout fame by several months. It's interesting that publicity shots taken before this (the few that exist) all show Houdini in the guise of a very traditional magician. These were clearly taken to sell the new Harry Houdini -- King of Handcuffs! It worked. 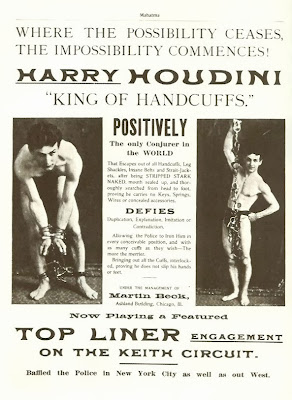 Houdini would later do a new series of "nudes" which would result in one of his most famous photos.

By the way, this was listed on eBay with a starting price of $3,300, but the auction was ended early by the seller before any bids were made.

Mahatma ad from 'Houdini A Pictorial Life' by Milbourne Christopher. You can see five different Bushnell photos on pages 48-49 of 'Houdini His Legend and His Magic' by Doug Henning.
Written by John Cox at 7:50 AM