The anniversary of Houdini's death this year (the 87th) is shaping up to be quite an occasion. Yesterday we got details of the Official Houdini Seance in Halifax, Nova Scotia. Today we have news of a special 3-day Houdini Celebration at the Houdini Museum in Scranton, PA. Below is a pared down version of the official press release (you can read the full release here): 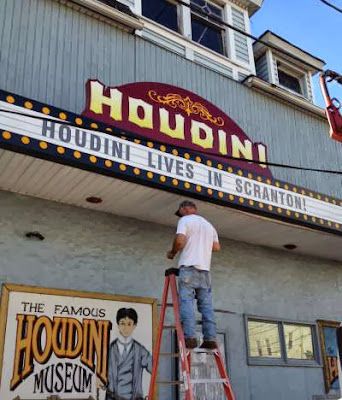 For three days, October 31, November 1 and 2, there will be a special Magical Houdini celebration, in Scranton, PA. During the three days there will be a ribbon cutting for the Houdini Museum's new marquee, a recreation of the Original Houdini Seance, an escape at the Ritz Theater where Houdini performed, an autograph session, a proclamation by Mayor Chris Doherty of Scranton, and a Magic Show.

Day one… Oct 31. To honor Houdini, there will be a ribbon cutting at 11:30 by the Mayor of Scranton, Christopher Doherty, for the new grand marquee that will greet patrons as they arrive at Scranton's Houdini Museum. The original design was by artist David Starr. The new marquee was built by Bryan Filarsky and Jason De Candis of Dragonfly Signs.

Because Houdini died on Halloween, Dorothy Dietrich, celebrity magician and museum director, will recreate the Original Houdini Seance, a tribute started by Houdini's wife Bess, the year after Houdini died. It 's not a real seance, but a test to challenge those who claim they can make contact with the dead. Houdini's wife carried on the tribute for ten years and then passed it on to legendary writer and friend, Walter B. Gibson. Before Mr. Gibson died, he passed the honor, legacy and responsibility of doing the Houdini tributes to Dorothy Dietrich of the Houdini Museum. Reservations suggested for this event, which begins at 12 noon, after the ribbon cutting.

Day two… Nov 1. The Mayor of Scranton, Chris Doherty, will proclaim November 1, 2013 as Dorothy Dietrich Day at 7 PM, at the Ritz Theater building, at 214 Wyoming Avenue, Scranton, PA, where Houdini himself performed. The honor is being bestowed to Dorothy Dietrich for the tourism, publicity and business her Houdini Museum has brought to the city, as well as all the public awareness generated when she and fellow magician and curator Dick Brookz and escape artist Steve Moore restored Houdini's bust at his grave in Queens, New York, 2 years ago. His grave site has recently been abandoned by the Society of American Magicians and Ms. Dietrich is advocating the raising of funds to bring the grave site back to its former glory. There 'll be a special signing when she will autograph pictures of herself, the Houdini Museum, and the new bust at Houdini's grave for those who attend. She'll also attempt Houdini's signature challenge escape from a Strait Jacket. This is a free event, in the space now occupied by Wendell & Company Interior Design, and is open for all to attend. Donations will be accepted.

Day three… Nov 2. Dorothy Dietrich will be performing a stage magic show at The Houdini Museum which is available to the public. The show will include her doves, a rabbit, a duck and two poodles. She'll also be floating an audience member who will rise in the air and even have a hoop passed around them to prove there is no visible means of support. Dorothy Dietrich will also give a guided tour of the Houdini Collection. Doors open at 1 pm. Reservations are required, call 570-383-1821 for tickets.


For more details on the Houdini Museum in Scranton visit their official website at www.houdini.org.
Written by John Cox at 6:13 PM