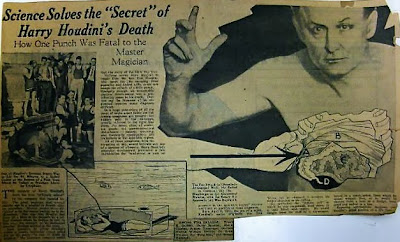 It was 87 years ago today that Houdini was punched in the stomach by J. Gordon Whitehead in the dressing room of the Princess Theater in Montreal. Those punches marked the start of a chain of events that would culminate in Houdini's death on Halloween eight days later. But did those punches kill him?

After Houdini's death, it was widely reported that the punches (frequently misreported as a single punch) were the cause of his fatal illness -- "traumatic appendicitis." But in the past few decades, historians have questioned this on medical grounds, saying that it's more likely Houdini was suffering from appendicitis before the attack and the punch only worked to cover-up the serious infection developing in his abdomen. This opinion has been stated in many Houdini documentaries (even by yours truly), and even appears on the official McGill University website. In fact, the most recent Houdini biography, The Secret Life of Houdini, goes as far as to say that traumatic appendicitis as a medical condition "has never existed" (page 518).

But Houdini author and expert Patrick Culliton has pushed back hard against this thinking in recent years. He believes Houdini's appendicitis was caused by Whitehead's blows. Furthermore, he thinks Houdini was not struck unexpectedly. He believes Houdini was prepared for the blows, but because of his broken ankle, he elected to remain lying on his dressing room couch. But with his back against a hard surface, there was no "give" when the punches were struck, which is key to performing a feat of physical prowess such as absorbing blows to the stomach.

Patrick cites the famous footage of Frank "Cannonball" Richards getting hit in the stomach with a cannonball. Having give in the body is essential. Had Richard's been standing with his back against a hard surface, well... Hence the blows from Whitehead were especially damaging to Houdini's internal organs.

But what about the claim that traumatic appendicitis doesn't exist? Why are we asking magicians? Why not ask a real doctor?

Marc Gellman, M.D., a Houdini buff and reader of this blog, has taken up this question for us and sent over a May 28, 2010 report by the RCS Advance Surgical Standard on Trauma Surgery on the "Systematic review of blunt abdominal trauma as a cause of acute appendicitis." Their conclusion; while rare, traumatic appendicitis absolutely exists. In fact, this report seems to confirm many of the conditions of Houdini's fast acting illness.


Although rare, the diagnosis of acute appendicitis must be considered following direct abdominal trauma especially if the patient complained of abdominal right lower quadrant (RLQ) pain, nausea and anorexia. Appendicitis can be reasonably attributed to trauma if the presentation was early after the traumatic event and the patient has not suffered from suggestive symptoms prior to trauma.


It's important to know that Houdini's doctors all signed off on the traumatic appendicitis diagnosis. The push back against the idea came from Houdini's insurance company. If they could establish that Houdini was suffering from the illness before the dressing room incident, they would not have to pay double indemnity for an accidental death. Some newspapers aided in this, reporting that Houdini was ill on his arrival in Montreal and was traveling with a nurse.

But sworn affidavits from all of Houdini's crew refuted the idea that the magician was ill before Montreal. It's true that a nurse was traveling with the show, but she was looking after Bess who was still recovering from a serious bout of food poisoning. The insurance company failed to establish pre-illness and eventually paid out. That should have been the end of the story.

So why have we all now taken up the cause of the insurance company? Why shouldn't we accept the word of Houdini's own assistants and the diagnosis of his own doctors? I believe it's because, at some point, someone suggested the medical improbability (and then impossibility) of traumatic appendicitis and we all took the bait. For some it appeals to a sense of logic; to others a predilection for conspiracy theories.

But thanks to Marc, we now know traumatic appendicitis does exist. So the possibility that Houdini died from Whitehead's blows has to be seriously entertained, especially considering how the punches were delivered (Patrick's theory). In fact, I'd say the burden of proof is all on the opposite side.

Now, whether Whitehead intended to injure Houdini or if the incident was truly accidental is something else that is argued by Houdini buffs, but I'm not opening that can of worms here. One controversy at a time! What I'm offering up here is proof that it is medically possible Houdini's fatal appendicitis could have been caused by the punches he received 87 years ago today. 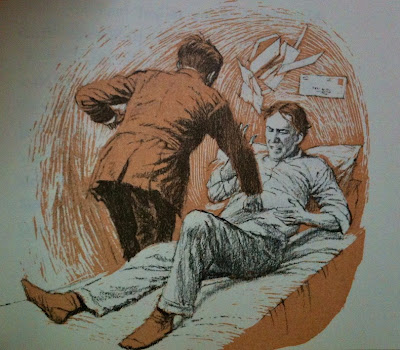 Thanks to Marc Gellman, M.D. for his help clarifying the medical side of this for us. If you'd like to read the full RCS report, shoot me an email and I will send you the PDF.

UPDATE: Check out this post for a revelation that might shed some new light on Houdini's reluctance to seek medical attention. Read: Did a contract clause kill Houdini?
Written by John Cox at 10:00 AM